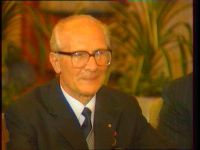 Member of the Communist Youth Association of Germany (Kommunistischer Jugendverband Deutschlands) in 1926, apprenticeship as slater; 1929 entry into the German Communist Party (KPD); Lenin School in Moscow; arrested in 1935 and sentenced to ten years imprisonment for high treason; 1937-45 in the Brandenburg-Görden Prison, founding member and chairman of the Free German Youth (FDJ), 1958 member of the Politburo and secretary of the Central Committee (Zentralkomitee) of the SED (Walter Ulbricht's successor), from 1976 general secretary; 1948-49 member of the Executive Committee of the German People's Congress, 1949-89 member of the Provisional People's Chamber and later People's Chamber (Volkskammer); secretary and chairman of the National Defence Council; chairman of the State Council (Willi Stoph's successor); retired from all offices on 18th Oct.; on 8th Nov. 1989 the prosecutor general initiated preliminary proceedings for abuses of power and corruption; 3rd Dec. 1989 expulsion from the SED; subsequently member of the re-founded German Communist Party (KPD); in custody on 29th - 30th Jan. 1990, released for reasons of ill health; subsequently stayed in Lobetal, Lindow, and from 3rd April 1990 in the Soviet military hospital in Beelitz; a warrant for his arrest was issued in November 1990; fled to Moscow in March 1991, stayed in the Chilean embassy in Moscow from December 1990; deported back to Berlin in July 1991; in custody in Berlin-Moabit until 13th Jan. 1993; indicted before the 27th Supreme Criminal Court of the Landgericht Berlin; in January 1993 after the annulment of the warrant for his arrest went to stay in Santiago de Chile and died there on 29th May 1994