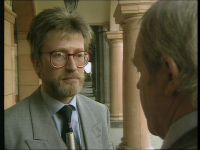 Abitur (school leaving examination); in 1967 joined of the Christian Democratic Union (CDU); studied law in Halle, employed at the secretary's office of the CDU main managing board, head of the district church office, in 1986 juridical High Consistory, deputy chairman of the Council of the Lutheran Protestant Church in Thüringen, member of the conference of the Protestant church leadership in the GDR; in 1989 co-signatory of the "Weimarer Brief" (Weimar Letter), which called on the CDU to "finally recognise" the problems of the GDR "realistically and unvarnished";
general secretary of the CDU, in 1990 member of the People's Chamber (Volkskammer); in August 1990 indications of unofficial assistance to the Ministry for State Security (MfS) and relieved of office; subsequently active in the economy of Thüringen, amongst other things foundation of a supermarket chain, shareholder of a builders corporation, resignation from the CDU.