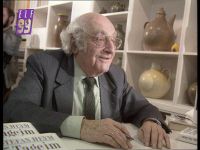 Author, father was a businessman; studied philosophy, German language and literature and journalism in Berlin; emigrated to the CSR in 1933, from 1935 scholarship to study in Chicago, subsequently doctorate; subsequently dish-washer, representative, proof-reader; 1937-39 chief editor of the weekly newspaper "Deutsches Volksecho" in New York; first novel in 1942; from 1943 soldier in the US Army, was active as sergeant (later lieutenant) of a "psychological warfare" company, editor of "Frontpost" on Radio Luxembourg; founding member of the Zeitung "Neue Zeit" in Munich in 1945, transferred back to the USA for "pro-Communist" views and dismissed from the army; left the USA due to the threat posed by the McCarthy Committee and the start of the Korean war; went to Prague via Warsaw in 1951; emigrated to the GDR in January 1952; in 1953 PEN Centre East and West; after the 17th June 1953 demonstrations published support for a critical social dialogue; in January 1956 controversy with Walter Ulbricht at the IV. Congress of Authors; received the National Prize 2nd Class in 1959; In December 1965 attacked by Honecker over the manuscript "5 Tage im Juni" (5 Days in June - published 1974 in the FRG); in November 1976 co-signatory of Declaration of Protest against the deportation of Wolf Biermann; constantly under surveillance by the Ministry for State Security (MfS) for his critical activities; 1978 expulsion from the VIII. Congress of the Association of Authors; together with eight other authors political expulsion from the Association of Authors "for gross violation of the statutes" of the Association in June 1979; on 4th Nov. 1989 celebrated Nestor as speaker of the citizen's movement of the demonstration on the Alexanderplatz; co-signatory of the declaration "For our country"; entered the National Assembly (Bundestag) with direct mandate in 1994 for the Party of Democratic Socialism (PDS); parliamentary elder until the premature resignation of his mandat