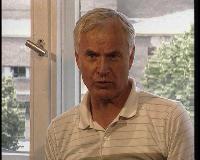 Secondary school, trained as engine fitter; in 1945 member of the home guard (Volkssturm), prisoner in the USSR until 1949, attended an anti-fascist (Antifa) school. Return to Germany; engine fitter; Socialist Unity Party (SED), Free German Youth (FDJ), Free German Trade Union Federation (FDGB); secretary of Brandenburg's FDJ executive committee, member of the FDJ Central Council; attended the Komsomol College in Moscow; 1st secretary of the Berlin district headquarters and secretary of the FDJ's Central Council; member of the district headquarter Berlin of the SED; correspondence course at the party college, Berlin's representative and later member of the People's Chamber (Volkskammer), member of the SED's Central Committee; external study at the Berlin College of Economy, various offices within the county and district headquarters, also in the SED's Central Committee; doctorate in 1966, between 1973 - 1989, 1st secretary of theSED's district headquarters in Dresden; at the beginning of Oct. 1989 co-initiator of the Dresdner dialogue with the opposition "Group of 20"; member of the Politburo of the Central Committee of the SED between 8th Nov. -3rd Dec.1989; 13th Nov. 1989 - March 1990 chairman of the Minister's Council (Willi Stoph's successor); Dec. 1989 deputy chairman of the SED/PDS; presented the concept "For Germany, united Fatherland" on 1st Feb. 1990, formed the "Government of national responsibility" on 5th Feb. with representatives of the Round Table; from Feb. 1990 honorary chairman of the Party of Democratic Socialism (PDS); from Oct. 1990 member of the National Assembly (Bundestag); on 27th May 1993 was found guilty by the Federal Court on three counts of giving instructions for the manipulation of election results, given a warning and penalty; the Dresden prosecutor's office demanded the revocation of the privilege of immunity in Nov. 1993 for making false statements to the Saxon Parliament; revocation of the privilege of immunity since Feb. 1994.