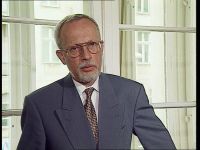 Father was a solicitor; in 1956 Christian Democratic Party (CDU); in 1958 Abitur (school leaving examination); subsequently studied at the College of Music in Berlin, subject viola; 1965-75 musician in various orchestras, amongst others Rundfunk-Sinfonieorchester Berlin, change of profession due to health reasons; 1969-75 correspondence course in law at the Humboldt University in Berlin, from 1976 solicitor for the Solicitor's Council in Berlin, from 1985 member and later vice president of the synod of the Association of Protestant Churches; from 1987 member of the consortium Church Matters at the CDU main management; from November 1989 chairman of the CDU; November 1989 - March 1990 deputy chairman of the Ministerial Committee for Church Affairs; between March - October member of the People's Chamber (Volkskammer); minister president (Hans Modrow's successor) on 12th April -2nd Oct. 1990; member of the executive committee and deputy chairman of the East CDU on 2nd Oct. 1990; in November chairman of the CDU of the federal state of Brandenburg; between October 1990-11th Sept. 1991 member of the National Assembly (Bundestag); Minister for Special Affairs; it became known in December 1990 that the Ministry for State Security (MfS) considered him an unofficial employee, a matter which Maiziere refuted, on 17th Dec. he asked to be relieved of all offices, suspended this until February 1991 and then took them up again; in August 1991 intentions of retirement, retired as deputy chairman of the CDU in September 1991 and gave up the mandate as a member of the Bundestag; since then he has been a solicitor specialising in, amongst other things, matters of official assets.