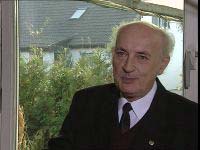 Son of a German Army (Wehrmacht) officer; 1952 Abitur (school leaving examination); apprenticeship as locksmith; incomplete mechanical engineering studies in Dresden; studied theology in Leipzig recieved theologian's degree in 1962; pastor in Lieberose (Spreewald), as of 1976 the Thomaskirche in Leipzig; founding member of the Christian Social Party of Germany (Christliche Soziale Partei Deutschlands) in December 1989, which on 20th January 1990 merged with 10 other groups to form the German Social Union (Deutsche Soziale Union); elected as chairman; entry with the party into the election coalition Alliance for Germany (Allianz für Deutschland); minister for development aid in de Maizière's cabinet; in 1990 due to the party's shift to the right changed over to the Christian Democratic Union (CDU); not re-elected in December 1990; political development aid work with the Konrad Adenauer Foundation and with the German Foundation for International Development; retirement in 1993