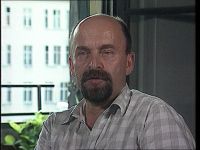 Apprenticeship as bricklayer; conscientious objector, eight months imprisonment, afterwards construction soldier; studied theology; vicar and pastor in the Berlin Samaritan's community, participated in the organisation and support of numerous activities by church-based peace and human rights groups, closely scrutinised by the Ministry for State Security (MfS); founding member of the party Democratic Beginning (Demokratischer Aufbruch) in September 1989; minister without portfolio in Modrow's cabinet from February 1990; from March chairman of the Demokratischer Aufbruch, from April minister for disarmament and defence; as of 1990 Christian Democratic Union (CDU) and member of the Bundestag; 1992-94 chairman of the Enquete Commission "Analysis of the history and consequences of the SED dictatorship in Germany" for the Bundestag. Federal chairman of CDA (Christian-Democratic Employees' Association) from March 1994 - June 2001; now honorary chairman ; member of Seniors' Union; member of the Bundestag since 1990