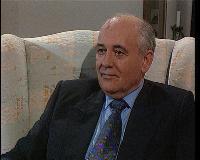 Soviet politician, degree in law and agriculture, holder of the Nobel Peace Prize, from 1971 member of the Central Committee (Zentralkomitee) of the Communist Party of the Soviet Union (CPSU), later secretary of the Central Committee; 1985-1991 general secretary, chairman of the Supreme Soviet; 1990/91 president of the USSR; introduced the reform movements Glasnost and Perestroika, supported reforms in favour of democracy and the abolishment of all medium-range nuclear weapons.