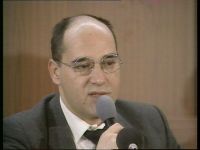 Father Klaus Gysi (Minister of Culture); Abitur (school leaving examination), qaulified cattle breeder; studied law at the Humboldt University in Berlin, trained as court and Bar Association assisatnt; 1967 Socialist Unity Party (SED), member of the Democratic Lawyers Union (Vereinigung Demokratischer Juristen); solicitor, represented amongst others Robert Havemann and Rudolf Bahro as well as members of opposition groups; doctorate, chairman of the Bar Association in Berlin and of the Association's Council of Chairmen in the GDR. In November 1989, Gysi presented a counter draft from solicitors to the government's Travel Bill, effected the permission for the mass demonstration on 4th Nov. 1989; became member of the working committee for the preparation of the SED's extraordinary party congress on 3rd Dec. 1989, responsible for the investigation in to abuse of official authority and corruption; chairman of the SED-PDS, later Party of Democratic Socialists (PDS) until December 1992; member of the People's Chamber (Volkskammer) between March - Oct. 1990, chairman of the PDS parliamentary group. Since October 1990 member of the German National Assembly (Bundestag) on a direct mandate; chairman of the PDS parliamentary group (confirmed repeatedly); refuted suspicions laid against him in January 1992 to have been unofficial member ( UM "Notary") of the Ministry for State Security (MfS); founding member of the "Committee for Justice" in July 1992.