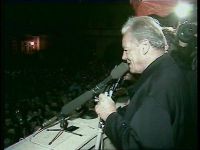 Original name Herbert Ernst Karl Frahm, German politician with the Social Democratic Party (SPD) fled to Norway in 1933, took the name Willy Brandt, was active as a journalist and in the Norwegian resistance movement; became governing mayor of West Berlin (1957 - 66), 1964-87 chairman of the SPD; 1966-69 foreign minister of the grand coalition government of the SDP and Christian Democratic Union (CDU); 1969-74 chancellor of an SPD-FDP coalition. Brandt is regarded as the architect of the new "eastern policy" (Ostpolitik). He received the Nobel Peace Prize in 1971 for his efforts to achieve reconciliation between the Eastern and Western Bloc. In 1974 Brandt resigned as chancellor in connection with a GDR espionage affair (Günter Guillaume). Fom 1976 Chairman of Socialist International, 1987 resigns from chair of SPD, 1990 Honorary Chairman of GDR-SPD, till his death in 1992 Honorary Chairman of SPD.