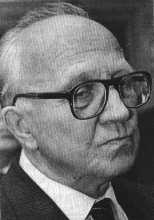 Grammar school; arrested in 1933, imprisoned for eight months, prison in 1945, concentration camps Sachsenhausen and Mauthausen. In 1945-46 German Communist Party/ Socialist Unity Party (KPD/SED); chief editor of the newspapers "Sächsische Volkszeitung" and the "Volksstimme"; 1st district secretary of the Socialist Unity Party (SED) in Chemnitz and Leipzig; from 1950-53 chief editor of the newspaper "Freiheit"; subsequently head of the Department of Agitation and Propaganda in the Central Committee (Zentralkomitee) of the SED; member of the Central Committee of the SED, of it's Politburo and of the People's Chamber (Volkskammer); 1st secretary of the SED county headquarters in Halle; between 1973-76 chairman of the Minister's Council; from 1976 president of the People's Chamber and deputy chairman of the State Council; on 8th November 1989 resigned from the Politburo, on 13th November resigned as President of the People's Chamber and was recalled from the State Council, expelled from the SED on 3rd December 1989; was in custody in January-February 1990; released due to ill health.