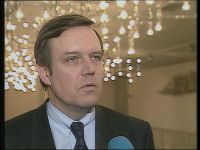 Abitur (school leaving examination) in 1962; became a member of the Christian Democratic Union (CDU) in 1963; degree in English language and literature and German language and literature; from 1968 to 1976 teacher in Hamburg; in addition to his teaching was engaged in political education; since 1970 Hamburg Bürgerschaft; since 1976 uninterrupted member of the National Assembly (Bundestag); 1982 deputy chairman of the parliamentary group; 1989 elected as general secretary of the Christian Democratic Union (CDU); 1992-1998 Defence Minister; a deputy of the new party chairman Wolfgang Schäuble; top candidate for the office of the minister president in the state of Schleswig-Holstein.