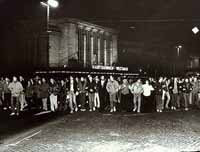 In Leipzig, the situation takes a dangerous turn before the weekly Monday demonstration by opposition groups. It becomes known that medical personnel have been called in for night duty, entire hospital wards cleared and additional blood reserves prepared. People expect the worst this evening.
The Tienanmen Square syndrome is in the air; it is no longer possible to rule out a violent response on the Chinese model, with many injured and perhaps killed. In this situation, prominent artists, including the Chief Conductor of the Gewandhaus Orchestra, Kurt Masur, a pastor and three district Socialist Unity Party [SED] Secretaries meet to begin an initiative for de-escalation. In the afternoon, their joint statement is read out on local radio: »We are distressed by the developments in our city and are seeking a solution. We all need a free exchange of opinions about how to develop socialism in our country ...We urge you to remain calm so that a peaceful dialogue will be possible.«

In the evening, Leipzig witnesses the largest protest demonstration in East Germany since the uprising of June 17, 1953: seventy thousand people march through the city center. The police no longer stand a chance, and they retreat in face of this overwhelming mass. Again and again, the decisive cry echoes: »We are the people!« It tells those in power that they have forfeited the right to act in the name of the people.