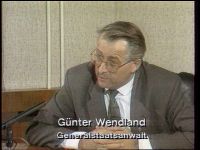 resettlement to Mecklenburg; Abitur (school leaving examination); full-time Free German Youth (FDJ) official, member of the federal leadership, then of the district leadership in Neubrandenburg; in 1951 Socialist Unity Party (SED); read law between 1953-57 at the Humboldt University in Berlin, in 1957 public prosecutor in Schwerin and Perleberg, in 1959 district prosecutor in Perleberg, in 1962 deputy regional prosecutor in Schwerin; deputy of the prosecutor general; confirmed in 1965 by the State Council; from 1966 member of the Central Executive Committee and in 1980 vice president of the Association of Lawyers; in 1986 candidate of the Central Committee of the SED; in June 1986 general prosecutor, resignation in December 1989; 1990 admission as solicitor.